Israel is one of those countries about which almost everyone has their own idea.

Even if you have never been there, you still know enough to have some expectations before the trip. I had seven rolls of black and white film and flew to biblical Judea to shoot street life in the Holy Land. 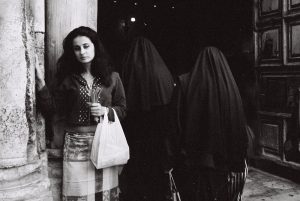 Israel starts at Ben Gurion Airport, at passport control. If you have relatives, friends and any other connections here, then you will find a lot of questions of various kinds, the purpose of which is to find out if you are a labor immigrant. You must have printouts of return tickets and hotel reservations where you will stay. Memorize their names, addresses, and occasionally insert phrases into the conversation about how you dream of returning home to your native country after so many days. The Israeli border guard does not put an entry stamp on the passport, but issues a permit – a piece of paper that should not be lost until the very departure.

It is convenient and quick to get to the city from the airport by train. A ticket to Tel Aviv costs 13 shekels, the railway goes through the whole city, and if you travel with a backpack, you can walk to any place without calling a taxi.

There is a lot of sunlight in Israel, and Belarusian skin, unaccustomed to this type of radiation, can be seriously damaged. The sun burns out colors, depth, feelings, everything. Here it is mercilessly punishing. The streets are filled with bright sun, contrast, alternating patches of light and shadow everywhere, but for a street photographer with film that can only be shot during the day, the conditions are ideal. 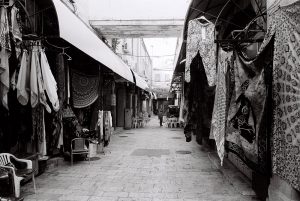 Tel Aviv is an interesting city. Very ancient houses that have seen more crusaders are replaced by quarters built in the Bauhaus style by immigrants from Nazi Germany, and those, in turn, give way to very modern buildings. Synagogues are adjacent to mosques, rainbow flags are on the balconies, and the faces of people are friendly enough not to be afraid to lose everything that is acquired by overwork even in the dark.

The beaches in Tel Aviv are beautiful, clean and comfortable.

Filled with nice people, but it’s easy to find a place for your towel. Something is constantly happening on the beach: someone is walking with dogs, someone is playing something, someone is doing yoga or praying. Taking pictures is easy and fun. Along the coastline are parks so green that even the sun can’t beat it. At sunset in this part of the Mediterranean, the sun sets into the water, and against the backdrop of the ancient walls of Jaffa, it is especially beautiful.

“Something is constantly happening on the beach: someone is walking the dogs, someone is playing something, someone is doing yoga or praying”

Having had enough of Tel Aviv, you can move to Jerusalem.

The city is dotted with temples, holy places, sacred objects and historical events. I honestly expected to see biblical Jerusalem. And it is quite likely that he is still there, in the old part of the city, between the Garbage and Jaffa gates, hidden under endless crowds of people and trading shops. The old city, conquered by King David, the Persians, the Crusaders, the Roman, Ottoman, and then the British empires, as if given to tourists for plunder. Streams of people run nonstop from shrine to shrine, greedily falling for any more or less significant relic. This city sells religions. God is in it – like Lenin in a mausoleum for Chinese tourists, behind glass and with a price tag to view. In the Garden of Gethsemane, you can buy a selfie stick, and near the Church of the Holy Sepulcher, you can buy a decorative wreath of thorns. But still, it is worth joining this stream of pilgrims, walking along Via Dolorosa, touching the stone of Golgotha ​​- after all, you are in Jerusalem. 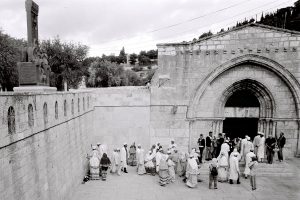 You can’t take pictures at the Wailing Wall on Saturday. Seeing a phone or something resembling a camera in your hands, a person with a badge will immediately come up to you and politely ask you to hide it (or impolitely, if you are stubborn). Saturday is generally a special day that should be taken into account in the plans. Transport and shops do not work, some places are closed to the public.

For me, the strongest impression was the crosses that illiterate crusaders scratched with swords on the walls of the Church of the Holy Sepulcher, so that people knew that they were here. A trace of history, but so close and understandable to anyone who has ever written his name on a desk or wall. Mentally, I also put my cross: I was in Israel.