Traveling in Israel and beyond

The Ein Gedi National Reserve is one of the most beautiful places in the Dead Sea region. Two streams – Nahal David and Nahal Arugot – create a unique oasis among the bare rocks of the Judean mountains. Once upon a time, the king of ancient Israel, David, hid in these places. We invite you to take a short walk through Wadi David and appreciate the beauty of this park.
To begin with, let’s remember with you what a wadi is. The Encyclopedia Understanding the Scriptures in the River section writes that, unlike the usual “river, a river valley, or wadi (Heb. naʹhal), is often a dry channel that is sometimes filled with a raging stream.” The wadis fill with water during heavy winter rains. But there are also those where water is available all year round. One of them is wadi David. 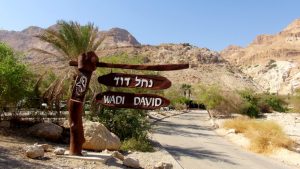 Ein Gedi National Park is located on the eastern edge of the Judean Desert.

To get to Ein Gedi, you need to go down the serpentine road 400 meters below sea level to the Dead Sea itself. This reserve is the largest in area in Israel; it covers an area of ​​almost 1500 hectares. Before entering the national park, we saw this picture:
No, this is not a hint that only goats are allowed to enter the toilets. And the boys are on the left, the girls are on the right

The very name of the reserve – Ein (En) Gedi – contains a clue. It is translated from Hebrew “Source of the goat”. Nubian ibex is a kind of symbol of the national park. These amazing animals have lived here since ancient times. Encyclopedia Understanding the Scriptures in the Goat section writes: In 1 Samuel, chapter 24, it is told how (king) Saul pursued David in the mountainous area of ​​En-Gedi … Judging by the fact that the pursuers were looking for David and his people “in the rocks where they live mountain goats”, these animals really lived in those places (1Sa 24:2). They were seen there even in our time. Goats are protected by law and calmly roam around the territory of the national park, not being afraid of people. We also saw them there more than once and even managed to feed them with bananas.

Entrance to the territory costs about 7 euros per person.

This includes not only a walk along the wadi itself, but also a trip to the excavation area. There are several routes of varying difficulty – green, red and black. In other words, there is where to walk! Therefore, if you are going there, we advise you to stock up on sandwiches and water. We stocked up! Let’s go inside!
Here is such a cozy path will lead us through the first part of the park. But before we go deeper, we had plans to get off the path. Here, on the right, on a huge tree, we used to see amazing, funny animals – rocky hyraxes. If you do not know who we are talking about, take a look here: Rocky hyrax. 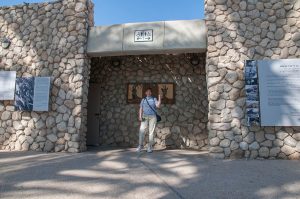 You need to go as quietly as possible so as not to frighten them. And yes, he was still there!
Daman saw us, but did not run away. We tried not to make sudden movements. Usually these are nimble animals, but in such situations they freeze and are cautious: they follow us and do not move. We did not want to disturb the damanchik and interfere with his plans, so we stood for a while, looked at him and returned to the path.

Of the large animals, wolves, hyenas, and red foxes also live in Ein Gedi. We have never seen them, and this is not surprising, because they are nocturnal. There was even a leopard here. But, as the workers of the reserve told us, he was alone and died about 8 years ago. There are also snakes and other similar inhabitants of the desert, which in no case should be forgotten when visiting the reserve.

Now to the left, then to the right on the path there are comfortable, wooden benches. You can rest comfortably on them when you return.
On different sides of the path, seemingly unremarkable trees grow, but if you pay attention to the signs in front of them, it becomes clear that this is a kind of mini-botanical garden.