This ancient body misled us with its name.

The fact is that in Hebrew the word גזר can be read both as Gezer, which means “carrot”, and as GaZer, which means “part, piece”. Both translations are somewhat strange, if we remember that we are talking about a once powerful, fortified city. But let’s get it right!

This is how Tel Gezer (Gazer) looks spectacular today. If you want to find it, it is located on a high mountain range in the Shefel region in the center of the country, about 10 km from the city of Ramla. 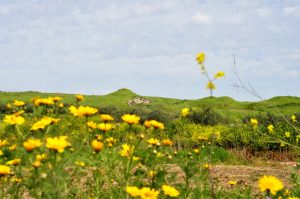 You can drive up to the hotel by car, and even take it upstairs, if your transport, of course, is able to overcome a rather steep climb. In any case, the car is where to leave. We have come here several times. The first time they left the car at the foot of the calf, and then they dared and drove to the upper parking lot.

Entrance to the territory of Gazer is free.

But before starting our journey into the distant past, we stopped to admire the views from above. Before us lies the valley of Saron; somewhere on the horizon of the Mediterranean Sea.

I propose to briefly recall what, in fact, the concept of “tel” means. The tell or cultural hill is a heap of human history. That is, it consists of layers or layers containing the material remains of certain periods of human habitation. The next layer lies on the layer representing the previous period of habitation, and, accordingly, under the remains of the next one. As a result, we have a kind of puff pie! How many such layers do you think were found in Tel Gezer? More than twenty, dating from about 3000 B.C. to 100 AD! Although some sources even name 4000 BC. 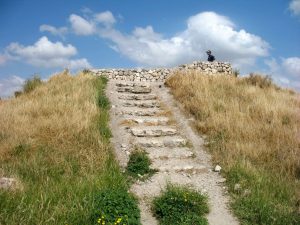 The ancient city of Gezer was located on the coastal plain halfway between Jerusalem and ancient Joppa (modern Jaffa). Look how well this part of the road is visible! Once there was an important trade route connecting Egypt and Mesopotamia. It is not surprising that Gazer played a very important role: being on the high ground of a mountain range, he controlled this part of the path.do we know about it? The Encyclopedia Understanding the Scriptures in the Gazer section writes: “Later on, Gazer was opposed by an Egyptian pharaoh for some reason. He burned Gezer and killed the Canaanites who lived there, and then gave the city as a dowry to Solomon’s wife. Solomon rebuilt it and perhaps strengthened it (1Ki 9:15-17).”

A city that is used as a dowry from one powerful king to another! Agree, this clearly shows that already at that time Gazer was far from being a seedy village. It is unlikely that the pharaoh would spoil relations with his future son-in-law

In other words, it was a very significant city for which the kings fought. There were at least three cities of this importance in ancient Israel. We will talk to you about this later. And now let’s start our journey along the route! We will go from the western part of the body to the eastern. By the way, Tel Gezer is about 200–250 m wide and 650 m long. 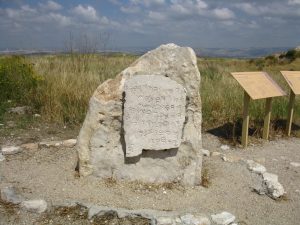 The first thing we saw, having walked a little along the path, was a large stone with inscriptions.
The famous Gezer calendar. This small limestone tablet measuring 7 x 11 cm was found during excavations at Tel Gazer at the very beginning of the 20th century. At the moment, it is the oldest of the Hebrew documents discovered so far.

What is remarkable about this calendar is explained in more detail in the article A year in the “good land”: a tablet “… probably dating back to the 10th century BC. e. An inscription was made on it in Hebrew letters. Scientists suggest that this is a brief description of the annual cycle of agricultural work. The tablet has been called the Gezer calendar.” This amazing document was written by… the boy Abijah, who was practicing spelling. He talks about two months of harvest, two months of sowing, and then another two months of late sowing, a month of flax cutting and a month of barley harvest, and so on.

It is unlikely that that ancient boy and his family could have imagined how important this tablet would be in three decades. The original of this unique document is stored in the Istanbul Archaeological Museum, and we have a copy in front of us.

This observation deck offers a very beautiful view towards the Judean Mountains to the Ayalon Valley.

In the foreground are the remains of a Canaanite tower.

Although the city was inhabited as early as 4000 BC, it was not fortified until the Middle Bronze Age (2000-1500 BC), when fortifications were first built, including stone walls, towers, and gates. on the western hill.

At that time, the Canaanites lived in ancient Gezer, who for a long time were under the yoke of Egypt. More than once they raised riots, wanting to get rid of the hated Egyptians with their predatory taxes. Each time, the Egyptian pharaohs crushed the rebellion. Therefore, this rebellious city is quite often mentioned in secular sources – in several non-biblical texts associated with Thutmose III and IV, Merneptah, Sheshenq and Tiglath-pileser III.

“Thutmose III (XV century BC) left a message on the walls of the temple in Karnak about the capture of Gezer. On the tablets in the Amarna Archive, the name of the city occurs at least nine times. On the stele of Pharaoh Merneptah, Sheshonk and Tiglath-pileser III.

“Thutmose III (XV century BC) left a message on the walls of the temple in Karnak about the capture of Gezer. On the tablets in the Amarna Archive, the name of the city appears at least nine times. Pharaoh Merneptah’s stele contains his boastful claim that he captured Gezer” (Insight on the Scriptures of Gezer). Maybe for this reason, the pharaoh gave Gazer to King Solomon: he got tired of constantly pacifying the harmful Canaanites