(the fortified city in the north of the country) to Beer-sheba was conveyed (see Judges 20:1, 1 Samuel 3:20). “Some cities in the Promised Land were south of Beer-sheba, and some were north of Dan. However, Dan and Bathsheba were located on the natural borders of the country. As for Bathsheba, she was south of the mountains of Judah, on the edge of the desert” (Encyclopedia of Understanding the Scriptures of Bathsheba). 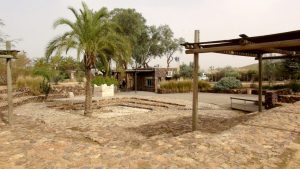 Today, on the site of ancient Bathsheba is Tel Beer Sheva National Park.

We leave the car in the parking lot at the entrance and go inside. A ticket for one person is 3.5 euros.
The first thing we saw right at the entrance to the national park was a large altar (1.60 by 1.60 m) with four horns.

Of course, this is not a real altar, but a copy. The original is now in the Israel Museum in Jerusalem. Here he is!

Collected it in parts; by that time, the altar had already ceased to be itself, but was part of the wall of the storage building.
What can we learn by looking at it? First, it proves that there was a temple or religious center in ancient Beersheba. And, secondly, it had nothing to do with the true worship of the God of Israel, since it was made of hewn stones, which was categorically forbidden by the law of Moses. Not to mention that, according to the same law, the only altar that had the right to exist in the eyes of the Most High God was to be in Jerusalem. Archaeologists suggest that this altar was destroyed during the religious reforms carried out during the reign of King Hezekiah. To have an idea for what reason and how religious reforms were carried out in the Kingdom of Judah, we suggest you watch the film “King Josiah. Love Jehovah and Hate Evil (Part 1), (Part 2)“. 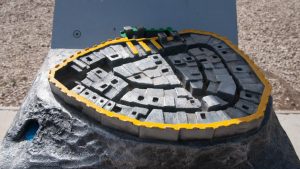 Further along the course are several small layouts.

The first layout clearly shows the ancient fortified city of Beersheba, which, like many cities of that time, was located on a hill. The city was surrounded by a double wall, which was 4 meters wide, and which was built on a steep slope to make it difficult for enemy troops to assault.

It is known that the area had abundant water supplies. As can be seen on the model, two wadis (valleys of drying rivers filled with water after heavy rains) go around the body on both sides – Wadi Beer Sheva and Wadi Hebron.

The history of this place is closely intertwined with wells and water reservoirs.

During the excavations, it was found that the city had two water supply systems: several wells (one of them at the main entrance to the city near the city walls (we will see it later), and a water reservoir in the city itself, in case of a siege. The following models show a water system leading to a cistern inside the city.

A dam was built at Wadi Hebron, thanks to which water was transferred to an underground reservoir dug into the chalk rock. This water system appeared during the reign of the Jewish kings.

On the plate near one of the models it is written that the water supply system consisted of three parts: a stone shaft 20 m deep, in the wall of which a flight of stairs was built; a reservoir with a volume of 700 m³, carved into the chalk; and a feeding canal, through which flood waters from the stream (wadi) of Hebron fell into the reservoir.

This system was used until the 1st century BC. e. and fell into disuse at the end of the Hellenistic period, apparently due to an earthquake that blocked the channel.

Now we’re just going there. Subsequently, it turned out that we again went on the route “back to front” We enter the tunnel from the outside; the ruins of the city are on the hill above.