Skip to content
Surprises of the Negev Desert – Small Crater

As we have seen more than once

the Negev desert (in the south of Israel) is by no means a boring, godforsaken place. She is full of surprises. Today we will show you one of the craters of this desert – the Small Crater or Makhtesh Katan. Another name for it is Hatser.

I won’t go into detail about how we got there. There is a wonderful post – Small Crater, where the road is described in detail. We got to Makhtesh along the highway through the Big Crater (Makhtesh Gadol) and further along the signs. The road there is not to say that it is very bad, but we would advise you not to accelerate on it, as it is not without unexpected surprises.

It will not be possible to drive up to the Small Crater itself. We leave the car in the parking lot and continue on foot up. Wear comfortable and non-slip shoes to make it more comfortable to walk on the stones.

Task number 1 is to climb the hill.

Task number 2 is easier – to walk along a more or less even plateau to the crater. In total, it took us up to half an hour at a calm pace (there was nowhere to hurry)

We counted three similar craters in the Negev, but it was the Small one that impressed us the most. From above, the entire bowl of the crater lies in front of you “as in the palm of your hand.” That’s very beautiful!

We found a comfortable place for ourselves at the top and settled down to relax and enjoy the views of this amazing place.

Looking at this unique natural phenomenon, you imagine a huge meteorite that fell from the sky many thousands of years ago. Or a huge volcano, bubbling here with its lava and turning into this amazing makhtesh. It turned out that all this romance had nothing to do with the Small Crater

For the sake of interest, rummaged through the Internet. Wikipedia found the following information: “Makhtesh (Hebrew מכתש‎) is a landform, a crater formed by erosion. The Hebrew term “makhtesh”, which means stupa, originally referred to several similar landforms in the Negev desert and was subsequently adopted as an international term and included in geological dictionaries.” 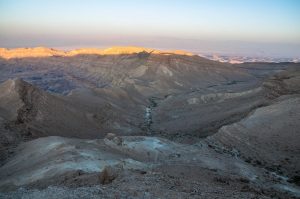 In other words, the “culprits” of the formation of this crater were water flows, which gradually destroyed rocks and soil, taking them with them. The rocks here are layered, sedimentary, with softer sandstone located in the lower layers. The water carried away the carbonate rocks of the upper layers, leaving the softer sandstone to be weathered by the winds. It turns out the so-called “brigade in a row”

Wikipedia writes that the size of this crater is 7 by 5 km; the depth varies from 300 to 400 m. It is very problematic to go down from this side. But if you go around the crater bowl and drive from the opposite side, you can get inside through the Gate of Asmodeus.

We decided to take a look at them. This is a very impressive sight. This time we drove along the highway to Dimona (if you want to go, see the post above).

The desert road itself is very remarkable. There are many viewpoints along the way.

We stopped at one of them to drink coffee and admire the views of the desert.

The road that leads further to the Crater Gate. This is not to say that the ride is completely uncomfortable, but this is clearly not an autobahn. You overcome a path of 10 km for at least half an hour.

On this road, we, in fact, go around the perimeter of the crater. This is the outer side of the rocks bordering the bowl of the crater. Pay attention to the difference in color: it seems that there was a grandiose fire. This place is famous for its colorful rocks.

And now, finally, we are at the goal!

Thanks to the sinuousness of the road, it is possible to see the Gate of Asmodeus from the side in all its glory.

By the way, we noticed with surprise that the road is well asphalted at the very end of the road. Before that, we were shaking along a rocky country path and wondering how people were brought here on buses. 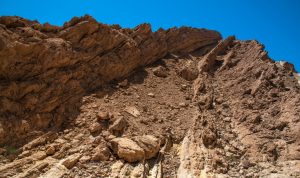 As you can see, it’s quite a decent look. Even more: with a romantic touch! We were glad that no one was going to meet us: it would not be very convenient for two cars to pass here.

The Gates of Asmodeus are ahead! The name is quite sonorous, but behind it there is nothing but sonority. They certainly deserve your attention!

It seems that someone huge with huge paws and sharp, huge claws for some reason got angry and drew stripes on the ledge of the rocks bordering the entrance. Or maybe he didn’t get angry, but simply, following the example of cats, he decided to sharpen his claws

We stopped briefly before the entrance itself to take a closer look at this amazing phenomenon.

From here we come. Caper bushes lined the edges of the road. See them comfortably nestled on the rocks? We have met capers more than once in deserted places. This is a very original plant with beautiful flowers and edible (but not raw) buds. 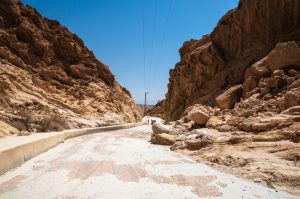 A little further there is a small parking lot where you can leave your car. There is no further way for her – only on foot along the laid routes. The path is not easy; so he was not part of our plans. Besides, it was very hot. But still, we decided to go a little deeper inside the crater – to look at least with one eye.

The feeling that you are really entering through a huge gate; on both sides, rocks of various, unprecedented forms hang over you.