The famous Sandemans tours are usually booked in advance

then the guy with the red umbrella at the Jaffa Gate gives you a number and takes you to the Old City. We randomly passed the first point and got the numbers 10 minutes before the start, because there were places left in the groups. In good English for two hours, a volunteer guide tells the story and stories about the Old City. The route runs through all the important places, and this is, in our opinion, a good way to get to know Jerusalem. Inside the old walls – four blocks, seven denominations and an endless number of travelers even in such an inconspicuous season – it is very easy to get lost or go deep into the ranks at the call of a local merchant.

Not being a religious tourist, visiting the Old City is no less entertaining:

after all, it is a colorful bazaar, the largest selection of souvenirs, the maximum proximity to the life and life of the Israelis, and the concentration of Orthodox people that are significant for the culture of the country. The latter are an interesting feature of modern Israel, which develops technology and has the safest airport in the world, but at the same time “holds on to prayer.” An impressive part of the able-bodied population (men) really only learns Torah and prays, living on benefits. Depending on the degree of orthodoxy and strictness of his rabbi, such a Jew may have a wife and family, or may close his eyes when passing girls.

And if in the Church of the Holy Sepulcher we didn’t even see anything behind the array of tourists, then we already went to the Western Wall freely, despite the “reduced” place for women (yes, upon arrival at the Wall, the ladies should immediately go to the right – the division here is strict). You can get around the entire Old City in five hours, going to key places, and spending 0 shekels on it.

Sandemans tour guides ask for donations, and of course, you can’t resist the aromas of the bazaar and not eat baklava – but in fact the entrance to all sights is open, and there is also a clean free toilet near the Wailing Wall. Being able to sit during a long hiking trip is more difficult. We found only one public shop where we ate a bunch of ice cream (in the Peace cafeteria on Al-Wadi Street they put two balls for 10 shekels) and drank sahlab – the national drink (also 10). Staying in the Old Town after 16.30 is not so pleasant anymore: firstly, the sun tends to go down, and secondly, all the shops are folded. 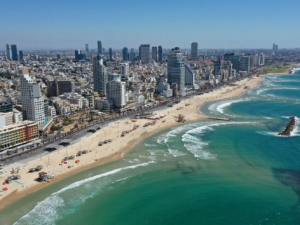 “Don’t panic: when ordering falafel, stumbling upon a man with a machine gun is a common practice”

At the exit from the Old City is a completely modern and ennobled Jerusalem, where life is seething. But the local stores discouraged us: if you can go to a chain store, it’s better to go there. Small shops will not give you either choice or freshness, and they will also ask for one and a half to two times more.

The scale of Israel makes it possible to visit almost everywhere with minimal travel: in just 3-4 hours from Tel Aviv, we reached the northern border with Lebanon, where the small Rosh HaNikra nature reserve lies. The reserve itself is a heavenly place with white cliffs, grottoes and the raging Mediterranean Sea. The territory has all the tourist benefits, the entrance for adults is 48 shekels. Previously, it was a strategic railway, even earlier – the beginning of the Tire stairs, where Alexander the Great used to walk.

Now it is just a border where there is not a single checkpoint to Lebanon, and warships are constantly cruising the Mediterranean. By the way, military waves can be caught almost everywhere: in every Israeli house there is a bomb shelter (where a pantry is usually arranged, but everyone knows what to do in case of an explosion), and girls and boys liable for military service are quite frequent characters of any street. Don’t panic: when ordering falafel, it’s common to run into a man with a machine gun.