In the very south of Israel

not far from the city of Eilat, there is an unusual zoo. This is the real safari! Not only a safari, where there is a hunt for animals grazing in the wild, but where these animals are photographed. That is, there is a photo-hunt. And the animals collected there are also not quite ordinary!
What does this name – Hai Bar (Hai Bar) Yotvata mean? Translated from Hebrew – wild life. Animals live there in the wild, not in enclosures. We are just flickering in front of their noses, habitual visitors, i.e. guests.

A necessary condition for visiting this national park is the presence of a vehicle on which you will drive around the reserve and observe the life of local inhabitants. 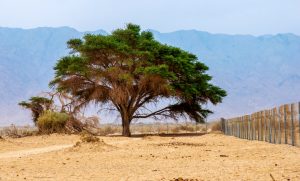 Having paid an entrance fee of about 8 euros (28 shekels) per person, we received the avenues of the reserve and entered the territory. We were unlucky with the weather: a sandstorm was approaching, but we hoped to have time to see everything before it began. Wildlife is wildlife – there are no paved roads there, so shooting a video when the car is shaking in all directions, you know, is not very handy

contain photographs of animals, their names and the approximate place or part of the territory where they can be seen. With some we were lucky, but with someone, alas, not.
Getting out of the car is strictly prohibited! It turns out that animals are free, and people are in four-wheeled “enclosures” Everything is the other way around!

It is very convenient to navigate along the avenue, so we were not at a loss when we saw the first inhabitants of Khai-Bar. They were Saberhorned Oryxes!

Cute guys! Their horns, indeed, look like sabers. Animals are well-groomed and calm. The Oryxes lived their usual lives, paying little attention to our car. The saber-horned oryx is essentially a saber-horned antelope (Oryx dammah) with horns 100 cm long or more. They weigh about 200 kg (we believed this, looking at their plump appearance). They are herbivores, feeding on annuals and perennials in the desert; most of their main food is acacia trees. This species of antelope became extinct here in the wild about half a century ago.

It’s very convenient to scratch your back with such horns, don’t you think? In the video you will see that there are quite a lot of oryxes. They bred well. Apparently, the local climate and survival conditions are quite suitable for them. By the way, this reserve was created not just by amateurs. The idea was to restore the diversity of wild animals that once lived in these areas, but became extinct over time. At least these antelopes did not disappoint: some of them were already tried to be released for free range in the desert about 20 years ago and they took root well there and even gave birth.

It is worth mentioning one more detail: what were the owners of this national park guided by when deciding which animals once lived in the local desert? Among other things, and on the Holy Scriptures, the Bible! That is, they specified which of the animals was mentioned in this ancient book. Did antelopes live in these parts? The Bible says yes! They are mentioned in the list of animals that the ancient Israelites were allowed to eat: “… deer, … wild goat, antelope, wild sheep and mountain sheep” (Deuteronomy 14:5). It is clear that at that time the Israelites knew very well who they were talking about. 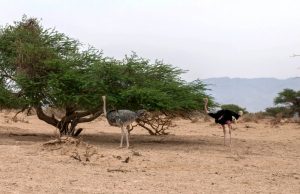 If you do not know who is who, we will tell you: the male is black, the female is gray. The male turned out to be a calm guy; he ate the branches of trees and was not interested in anyone or anything. A little further away, we noticed another one sitting peacefully on the sidelines. In addition to the fact that ostriches eat mainly plant foods, I was amazed that at the same time they “do not disdain snakes, lizards and even small birds”
But the female was very sociable and came to chat with us.

All the time while we were standing, she poked her beak into the glass of the car, either from one side or the other. So we don’t really advise you to open the windows. We still don’t understand what attracts her so much inside the car. It is strictly forbidden to feed animals, so it is unlikely that she often received tasty treats from cars. By the way, ostriches are considered one of the largest birds. Their height reaches two or more meters, and weight up to 150 kg. In ancient times, ostriches were called the camel bird (I wonder if camels were offended by this comparison?). This is because they can go without water for a long time! (see Ostrich). 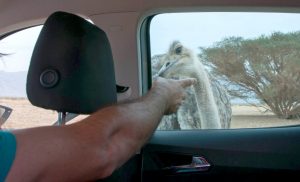 Does Holy Scripture mention ostriches? Yes and yes again! “The ostrich was included in the list of unclean birds that were forbidden to be eaten by the Mosaic Law (Lv 11:13, 16; De 14:12, 15)… In the Bible, ostriches are mentioned among the inhabitants of the desert, such as jackals (Isa 43:20) … Job sat in the ashes and wept mournfully, calling himself … “a friend to the daughters of an ostrich” (Job 30:29).” Leaving the disappointed ostrich-lady standing on the path, we continued on our way.