Skip to content
Food of the Promised Land: what is eaten in Israel

Food of the Promised Land: what is eaten in Israel

In the country of the eternal sun

sandy deserts and several religions, people like to eat tasty and satisfying food. “Around the World” found out what you should definitely try when traveling in Israel

Israel is a country of immigrants who have come from all over the world and brought with them the food and customs of the places where they used to live. Eastern traditions clashed with European ones here, dividing and mixing what they individually love on each of the continents. Israeli cuisine can be called Mediterranean – hearty legumes, flatbreads, fish and fresh juicy vegetables and fruits grown under the hot sun prevail here. 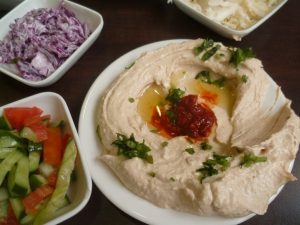 Local cuisine is usually divided into two main categories – Ashkenazi and Sephardic, as well as the population of the country itself. Ashkenazi Jews, who make up about half of the Jewish population of Israel, are mostly descendants of people from Central Europe. People from the Iberian Peninsula, as well as from the south of France, from Greece, Turkey and Italy are called Sephardim.

Ashkenazim love chicken broth, liver pate, mincemeat and tsimes. Sephardim favor oriental dishes such as couscous groats, tiny balls of wheat groats, shakshuka, fried eggs bathed in a pour of fresh tomato, onion, and bell pepper sauce, or mafroom, “potato crumbs” stuffed with minced meat. These dishes are full of spices, fresh herbs and lemon juice for freshness, they are invented in a hot climate, so they stay fresh and tasty for a long time.

Another main difference between local products is their kosher quality. Since Israel is a religious state, restaurants and shops on its territory strictly follow the rules for believing Jews from the Jewish code of laws – Halakha, which is compiled on the basis of the commandments of the Torah – the holy book of the Jews (for the Orthodox, this is the Pentateuch of the Old Testament).

Kashrut allows you to eat the meat of only those animals that are both artiodactyl and ruminant, that is, they have a complex structure of the stomach and eat food of plant origin. These include cows, goats and sheep. Of the birds “admitted to the table” were chickens, geese and ducks. It is strictly forbidden to eat pork: a pig in Judaism is considered an unclean animal. Also banned are rabbit meat, animal blood, and some seafood, such as crayfish, crabs, and shellfish. “Forbidden fruit” is also considered fish without scales – catfish, sturgeon, eel and others. Fish and meat should not be eaten together. Moreover, you can not eat dairy with meat together. For example, meat with cheese or a cream-based sauce is considered non-kosher.

It is not difficult to follow these rules in Israel

since there are simply no prohibited products in ordinary stores, and on fasting days, many shelves with accessible items are covered with white cloth and the goods from them do not break through the checkout. Restaurants will also not tempt you with “sinful” dishes. However, if you wish, you will find non-kosher food, but you will have to look for it with due diligence.

Drizzled with olive oil, this fresh golden nourishing pasta is served with slices of warmed thin pita. At the same time, pita is often wrapped in a sheet of tissue paper to make it easier to dip the cake in hummus.

Hummus is that appetizer before the main course (and sometimes breakfast or lunch), after which the whole dinner can go down the drain, because once you start eating it, you can hardly stop quickly. However, hummus is not so simple: if you decide to take it as the main character of dinner, be sure to order masabaha – hummus flavored with paprika, lemon, whole beans for texture and tahini – another apostle of the local cuisine. The dish is often also served with eggplant and salted cheese for contrast. For those who are especially hungry and do not gravitate towards vegetarianism, there is also a famous kavarma in Israel: small pieces of meat fried on a spit with salad are seasoned with the same hummus for greater satiety.

Hummus can also be prepared at home, for this, Turkish large chickpeas need to be soaked for at least four hours in water, then rinsed and boiled for about an hour and a half, then grind it with a blender, adding water mixed with tahini, spices and lemon juice to the mixture.

This pancake dough-like paste is made from sesame seeds. It is tahini, or, as it is also called in Israel, tahini, that is the future basis for the tahini halva familiar to us from childhood.

Tahini in Israel is sold in large white buckets weighing a couple of liters and diluted with water, olive oil and lemon juice as a dressing for salads and other dishes. Perhaps this is the most classic taste for Israel, because tahini in one form or another can be found in almost any dish, including desserts.

The cute brown balls that often wink at passers-by from street food stalls in Israel only pretend to be meatballs, but are actually “meatballs” made from a mixture of crushed beans, deep-fried. Perhaps the most common fast food in the country. It was invented by the ancient Egyptians as a substitute for meat during fasting.

In Israel, they love eggplant in all varieties, not only as a vegetarian dinner, but also as a breakfast or lunch. As a rule, vegetables are fried over a strong open fire for a coveted smoky flavor and served with cold yogurt and herbs.

Babaganoush, on the other hand, is an eggplant pate with a sauce of the previously mentioned tahina and lemon juice, which is served in addition to pita. Delicious and satisfying, this dish is easy to prepare at home, surprising guests.

Shakshuka is a “substrate” of a mixture of finely chopped tomatoes, bell peppers and onions, carefully fried in olive oil, with the addition of coriander and other spices. On top of the sizzling fiery mixture, several eggs are carefully broken.

Food of the Promised Land: what is eaten in Israel
Both adults and children like to cook shakshuka for family breakfasts, because it is quite difficult to spoil it, and cooking is fun and fast. 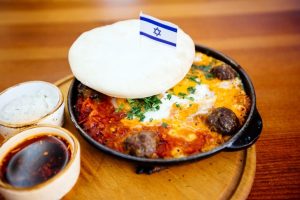 The most favorite dish of the Promised Land is the Jerusalem roast. It consists of four types of chicken meat at once: breast, heart, liver and navels. The pieces are served golden, flavored with a lot of onions and branded additives, which each cook has his own.

The meat is placed in pita or just on a plate. Such a dish can be found in almost all Israeli restaurants, but for a more authentic experience, try it at the Mahane Yehuda Bazaar in Jerusalem.