In the north of Israel there is a forgotten, once important city – Caesarea Philippi.

In fact, there is almost nothing left of it, except for a small Arab village. We invite you to make a trip to the upper reaches of the Jordan River and visit there with us. The beauty of this area still attracts many tourists and locals to this day.

It is worth noting that in Israel there are two cities with the name of Caesarea. About one of them – once a rich port city that served as the residence of the Roman rulers – we told you earlier in the post of Caesarea – the ancient capital of the province. Today we will talk about another Caesarea, which was once Panea.

We drive almost to Mount Hermon itself (Hermon) past the Tel Dan National Park. Dan at one time had the position of the chief city of the north of Israel. And so it was until the neighboring city of Banias, which later became Caesarea Philippi, reached the level of supplanting Dan and taking his place.

At the entrance to the National Park (adult price 7 euros) there are preserved remains of buildings. Even in this deplorable state, they testify to the times of wealth and prosperity of the city: the remains of columns, pieces of a mosaic.

In the II century BC. e. the city became the possession of King Antiochus III (the Great), the ruler of the Seleucids. After the Romans captured Judea, Caesar Augustus gave the city to his friend Herod I the Great. At that time, there was no Caesarea Philippi here, but there was a town with the original name – Panea. Where this name comes from we will tell you a little later. The Jewish historian Josephus writes that Herod, without hesitation, built a white marble temple near the spring and dedicated it to Caesar. Later you will see him in the reconstruction.

Remains of the former splendor are exhibited along the path.

After the death of Herod the Great, his kingdom was divided into three parts between his three sons. The north and the Golan Heights went to Philip. With the coming to power of the tetrarch Philip in the II century BC. e. the city became the capital of the district and was transformed. The Encyclopedia Understanding Scripture in the section of Caesarea Philippi writes: “Philip enlarged and beautified the city in honor of Caesar Tiberius. Then it was renamed Caesarea, and, in order to distinguish it from the port city of the same name, they added “Filippo” to the name.” Very humble of Philip

The city remained the capital during the reign of Agrippa II (until the second half of the 1st century AD). Josephus reports that Agrippa made Caesarea Philippi very luxurious, decorating it with a huge palace and temples with many statues. In Banias, you can see the remains of Agrippa’s palace, but we did not get to them, leaving this for the next trip.
Banias National Park occupies a huge territory, which is completely impossible to bypass at a time. It remains only to choose one of the routes and enjoy it.

The first mention of Panias appears in the works of the historian Xenon of Rhodes, where he tells of the battle between the Seleucids and the Ptolemies for dominance over the land of Israel in 200 BC. e. There is an assumption that the city was founded in the IV-III centuries. BC BC, and its ancient inhabitants named it after the god Pan, who was depicted as thickly covered with wool, with goat legs, a long beard and horns. To show you what they thought this deity looked like, we had to cover it up a little. 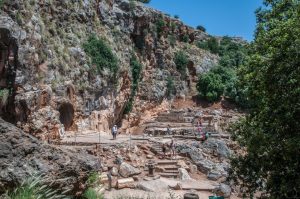 In honor of the god Pan, a sanctuary was built in a picturesque place. Now we will go there.
Here, at the foot of a cliff 40 m high and 70 m long, were the temple of Augustus and the sanctuary of Pan (not a flattering neighborhood for Caesar)

There is a small playground next to the temple. This is the sanctuary of the god Pan: a cave and several niches carved into the rock nearby.